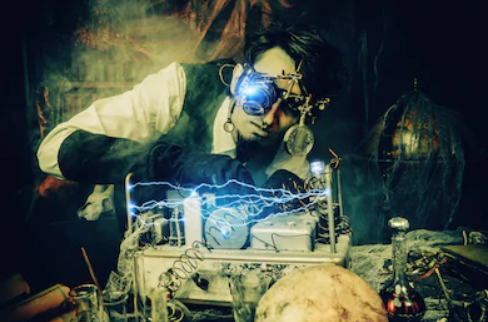 You’ve heard the saying about all work and no play. Fortunately, reading science fiction is play that benefits an inventor’s work.

I could easily provide a dozen reasons why you should take time away from your hard work and read for fun. I’ll leave that for another post. Though, I’ll mention two things.

For starters, reading is better for your eyes and brain than watching a digital screen; especially if you’re going to indulge in entertainment for long periods of time or before sleep. If you’re looking to improve your creativity and problem-solving skills (which I’m guessing you are), a good rule of thumb is to read more and watch less.

Reading science fiction instills ideas not only about technology, but the ways in which different people (or characters) use technology. Science fiction authors have long explored how technology — even when developed with positive intentions — can be used for ill-intentions.

This is why the most esteemed scientists, researchers, thinkers and inventors read science fiction. Even higher ed institutions are recommending scifi. Take for example the Massachusetts Institute of Technology (MIT). MIT provides courses such as “Science Fiction to Science Fabrication,” or “Pulp to Prototype.” The campus is home to the worlds third largest public science fiction library.

You may even get an idea or two. Inventors of the first submarine, cellphone, rocket, helicopter and other innovations give credit to science fiction for their inspiration.

Here is a list of my favorite short science fiction stories about inventors and the impact of their inventions. I’ll be updating this list as I read more, so come back soon and don’t be shy to share any favorites you recommend. I’m on Instagram as KRDollar.

Don’t forget to read about my journey exploring science fiction, innovation, and culture.

What if you could choose to live in another reality? Would you do it?

For a multi-million-dollar upfront payment, this time-traveling scientist will give you a glimpse of the future. Not just for one reality, but three different realities, and you choose one of them to live the remaining years of your life. The caveat is that the transition doesn’t take place immediately.

The author creatively and non-intrusively asks if and how our beliefs concerning the future impact the actual future. And if our beliefs do impact the future, should we be concerned that people choose the reality that results in destruction just for the comfort of knowing how things will end?

In the closing sentence, when the customers have left and the assistant and time-traveling scientist count the day’s revenue, the assistant says, “You know, among our customers there were many officials, officers, politicians…”

Get ready to cozy up for a 30-40 minute read that will keep you on the edge of your seat.

This story jumps into the plot as protagonist Major Hendricks watches an enemy solider scurry up the dirt-packed bank near his hideout. Before reaching the bunker, the enemy messenger is dismembered by claws — a military weapon designed to survive the barren waste-land of post-apocalyptic Earth and destroy any person that doesn’t activate a neutralizer. Holding his thumb on the neutralizer, Major Hendricks pries apart the fingers of the enemy messenger’s hand, and reads the suicide-mission delivered note.

Philip K. Dicks keeps you turning the pages as he throws characters into deeper conflict, danger, and conundrum. Published in 1953, this story proves Philip K. Dick had an understanding of the possibilities and issues concerning machine learning and automation. This story will have you questioning weapons of war, and the risk of depending too much on artificial intelligence to design, develop, and manage technology.

Biotechnology scientist Virgil Ulam’s work is at risk of being destroyed when the medical biochip company he works for discovers his newest development.

Desperate to save the the biotech before it is destroyed and he is removed from the premises, Virgil injects the nuceloprotein computers into his body; and that’s where this story begins.

Author Greg Bear takes us down a journey of Virgil’s change in physical appearance and mental state through the eyes of Edward, the story’s narrator and Virgil’s old college friend. While Virgil at first enjoys his healthier and better-looking physique, his lax attitude soon turns to concern. The bio-computers in Virgil’s body are programmed to multiply and improve. But they have also developed a collective consciousness, and are spreading, communicating, and working fast. They are explorers and creators, and Virgil’s body has become their universe.

This story calls us to ask how biotechnology will be contained or eliminated if it becomes too high-risk, especially if some scientists are determined to keep it alive.

How will genetic engineering and biotechnology not only change our bodies, but our consciousness? Will the inventions intended to improve specific aspects of our lives turn us into something we never imagined?

How the World Was Saved

Two inventors named Trurl and Klapaucius, who happen to be robots, almost annihilate the world when Trurl develops a mechanism that creates anything starting with the letter n. A jealous Klapaucius taunts the prideful Trurl, and the battle of testing the machine’s capabilities escalates until the machine is ordered to create Nothing.

Full of puns and scientific jokes, this inverted creation story cleverly injects negatives such as nonentities, nonsense, and nonsupport to remove things from the world.

Author Stanislaw Lem writes, “Things were removed from the world, and they ceased to exist as if they had never been… And to this day the world remains honeycombed in nothingness.”

This comical yet dark story captures how destructive technology can be when driven by ego and insufficient knowledge for long-term consequences.

What makes this story especially interesting is the author. Lem lived in Poland during World War II. Raised Roman Catholic, Lem didn’t even know he had Jewish ancestry until the Nazi regime took over. He survived by forging identity papers and working as a mechanic. He even sabotaged the Nazi vehicles he repaired as part of the resistance.

I’ll continue to update this page as I read more stories, so come back soon!

Also, let me know what stories you’re reading. Anything you recommend?